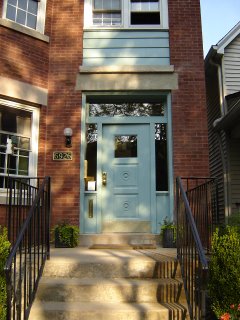 Well, the tuckpointing is done. At left, you can see the clean up job the tuckpointers did on the facade of the building. Steve is going mad because on the left side of the limestone over the door, there is a slight angle at the top.

He is quite detail-oriented about these things. I think it looks good- way better than before. I see it, but it doesn't bother me.

Here's what else was accomplished this week: 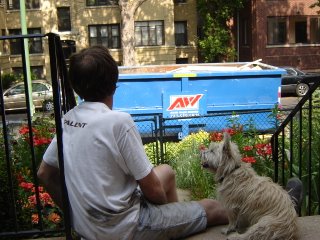 You know you've arrived when you have one of these in front of your house. It's like Steve Martin in L.A. Story when he says he will know he's "someone" when the FedEx truck comes to his door with a package for him. Kind of the same feeling with a dumpster, yeah.

Today, we were working on the nails again. I'm pretty tired of this task I must say. My hands are giving out of me, but we are almost done!
Posted by Jocelyn at 5:20 PM

I know exactly what you’re going through with the nail pulling. From all the lumber from the addition and the asbestos siding I don’t even want to guess at how many thousands of nails I have pulled. As for the angle on the limestone lentil, I’m with Steve. That would drive me nuts. I would probably be on a ladder with touch-up paint trying to make it look less obvious.

A tip in case you guys haven't already figured it out. Get a "real" pocket door frame, not one of the kits. I used Stanley kits from HD and I regret it. I think I found my hardware at Hardware Hut (http://www.thehardwarehut.com) and if I remember correctly, they had a pretty good selection. The facade looks great!

Greg- We are putting a new awning on, so maybe that will distract the eye a bit more. I'm too whooped to care at this point. Steve is the one who really keeps us focused on the details like that- I am just a work horse half the time!

Judy- thanks for the tip- we are going for heavy-duty hardware- Johnson Hardware- which is the only pocket door hardware that meets ASNI requirements (per Steve). We are buying commercial grade- esp. since we may rent out the unit.

I should do a post on the pocket door project as many people may need the info at some point!

Jen- thanks- your comment made me feel good this morning-tired arms and all!

Boy, what an improvement. It just gives the whole place a crisp, clean new look. And you are right about the maintenance issue. You certainly don’t want water coming in your walls. We have had issues in our basement, which has a brick foundation, and it’s not pretty! I wouldn’t worry about the area near the limestone. I think you’re the only one who would notice. Keep up the good work!