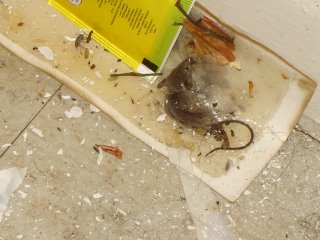 As promised, here are the photos showing the tenants bad housekeeping and spite. Don't read this if you don't want to see dead mouse photos.

We found one of these under the stove and one under their microwave cart. I didn't take photos of underneath the refridgerator but suffice it to say many critters spent much time under there and nary a broom ever darkened their doorstep.

I don't think I ever posted about the hysterical "We've got mice!!" phone call from Thadeus. He was beside himself because he had found mouse droppings -in-his-bed! He said, and I quote, "You have to do something about this- this is unbearable for me." Of course, we called the exterminator and we did laugh about it too- he was really quite pitiful. Now if it had been cockroaches and they had come into our unit, I'd have gone in-sane. But we didn't ever have one single mouse visitor or dropping in our unit while he was being ravaged above us.

I realize that having mice in one's bed is a terribly upsetting thing, but the fact that he made no connection to his life of sqaulor and the fact that mice felt comfy enough in his apt. to hop into his bed made us less sympathetic to his plight. Leave food all over, bags of rice on the floor and you're surprised you have mice?

It's over now, but the story was funny and I just wanted to post for posterity I guess.

The "girls" left us this, wasn't it thoughtful of them? They had girl-parties the entire last week they were here. 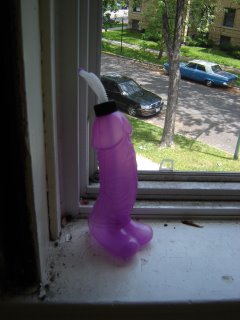 An empty apartment except for a penis-sippy-cup. That about sums it up folks. Can't wait to see the google searches that find this post now.

In addition to the above, the stove, which was new when they moved in 3 years ago, is now trashed pretty much. Our saving grace was getting them to pay the last month's rent. This left them highly motivated to get their security deposit back, which is how we got them to remove all their belongings.

The place was crammed with stuff- it was getting to be like a junk shop almost- so cluttered. You literally could not walk in half the dining room. Really, we did them a favor. If not for us, they might have ended up one of those people that gets trapped under a pile of newspapers one day. Amen.
Posted by Jocelyn at 6:41 PM

Oh man...we saw a lot of baaaaad things when we were caretakers of an apartment building (before we bought our house), but I have to say we never saw dead mice!! I can't imagine your relief that they've moved.

It's amazing the lessons you learn when you clean up after renters. Jay used to rent bedrooms in his apartment, and I now know how to scrape candlewax off wood trim, and that it's nearly impossible to remove the smell of incense from a room..... But I agree with the other posters - you win the worst renter contest...
takoma-bark.com