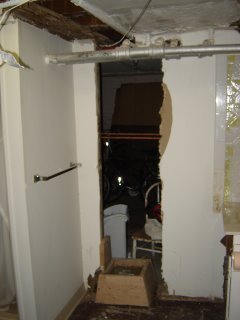 Okay I know this isn't really that exciting, dingy basements just aren't that glamorous for the most part, but I'm all about the documentation right now.

Yesterday, Miro and crew removed part of a wall (see left) to add another post and poured the footing. They are going to also add a support beam for the back of the building, which contains the kitchen and our bedroom. Our 2-flat was built originally with no support beams for the back side of the building. Maybe this is because kitchens didn't used to have all the appliances etc... This is what we think.

So, since we now have much more stuff than what they had back in 1910 and our building is sagging a bit, we are updating the support posts and beams. 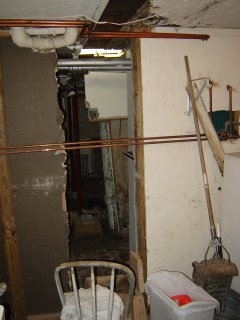 (view from other side)

In this process, we have moved Steve's office out of the dingy basement and into our dining room. I hate Steve working in the basement for a few reasons. It's dingy and not nicely finished and there is still asbestos down there. Now I have been told that the asbestos is only dangerous when it becomes airbourne, but I still don't like him down there. We are now thinking that we will make our den his office and just keep files and stuff down there for him to get at. The den is not big enough for everything. It would make me happy for him to have a nicer environment to work in and I think he would be happier too.

Oh, one more thing. Initially, our contractor wanted to put the posts in after 2 days. Steve thought this seemed a bit fast for dry time and called the concrete manufacturer Quikrete and spoke to an engineer on staff who said minimum 5 days dry time. He discussed this tactfully with our contractor and they are now waiting 5 days before doing the posts. You really have to watch these things it seems. Just like your own health, one has to take responsibility for the "health" of your building- no one cares as much as you do.

Did you stay up until they were gone so you could go up and dance around? :) Congrats!

i'm so glad y'all called "quickcrete" to double check the dry time...we ran into a similar situation and confirmed 5-days minimum only AFTER we waited 2 days, ruined the footing, and had to repour...you're smarter than we were

We did stay up, but I was too frazzled to dance around. I think it will take a few days for it to sink in.

Meredith- it's really Steve that is the good one for this kind of thing- he researches everything so he knows what they are doing. I learn ALOT from him.

As much as I love dingy basements (Really, I do!) I really read this post to see if the tenants made it out. I can see now that they just barley made it out on time. I’m willing to bet they dragged it out just to irritate you. Grumble, grumble, grumble.

Greg- it was painful, yes their drawn-out leaving- I think it was just typical of their selfishness and lack of consideration. I am sure the world will eventually reveal to them that we are not the cad landlords they think, but I don't even care about that. I am just glad they are done. Maybe we'll do a sage burning ceremony to clear out their "energy" from the apt.

Great blog; we are slowly going through many of the same projects in a vintage 3-flat in Ukranian Village. I was hoping you could provide the name of the crew (and any other resources) that did the basement post installation. We need to replace some posts as well as add 2-3 in a section of the basement (sounds very similar to your needs). Would you mind shooting the info and any advice? Thank you! Scott Email please at ukivillager@gmail.com