I don't think May 31st will be soon enough

Almost midnight and for over an hour someone has been walking around upstairs over my head. I couldn't imagine who since Thadeus in Africa. I'll have to tell him someone's been rifling through his things when he returns. yeah right.

I just came back from upstairs. Youjay says, "what noise do you hear? Come in and see."

The timing couldn't have been more perfect. Some bimbo girl WHO DOES NOT EVEN LIVE HERE opened the door to Thadeus' room with frigging high heels on. She looks out at me, cell phone hanging from her ear.

I said, "She has been walking around with high heels on."
She says, "I just out them on. I'll take them off."
I said, "I've been listening to you for over an hour and a half since I went to bed."
I said, "You do not even live here. I do not know what it is going to take to get through to you guys."

Youjay said, "The best thing is just to leave," and closed the door.

There's still alot left unsaid. I have a phone appt. with an attorney on Sunday.
Posted by Jocelyn at 10:00 PM 6 comments:

a letter from Thadeus was outside our door this evening...it was a nice letter. It was a letter that almost made me regret my hard feelings, but then I'm only a human who needs her sleep and likes peace and quiet when she's at rest, which isn't too often.

Dear Steve and Jocelyn,
I'm deeply sorry for all the inconveniences we may have caused you. It is not intentional nor an act of defiance from any one of us.

It continued on and I won't put the whole letter here because I'd feel like that was mean. I was raised Catholic so for causing anyone bad feelings I feel bad --but not that bad because they have upset me alot and I am right now listening to them walk around all night tonight again.
You just can't ask people not to walk around but I have examined our walking patterns and we just don't move around like they do. We sit at a desk or on a couch and get up occasionally. Up there it's like they are walking back and forth constantly for like 30 minutes straight and I'm not kidding. And then there's the running....

The best part of the letter was when he wrote that they have decided to move out at the end of May. I wish it was sooner, but maybe they want time to save money. I don't want to look this gift horse in the mouth.

The end is in sight anyway. And we have a tenant-free summer to look forward to.
Posted by Jocelyn at 6:30 PM 5 comments:

We are at the point now where we need to get quotes for the work upstairs. We have asked around and gotten a few referrals, but it wasn't enough. So, we decided to consult Angie's List.

I wonder if any of you have ever used this resource? If so, we'd be interested to hear about your experiences.

It's a national site, so many of you could use it in your area. They have a Quick Tour on the site that kind of gives you the low down. I know many of us are DIYers but there are times when you need outside help! ...except for Gary of course :o)

This week Steve contacted 5 general contractors with "A" reviews on Angie's List. We got 3 return calls within 2 days and 3 appointments set. I think this is pretty darn good compared to past experience. Maybe it's because this is a pretty good sized job.

I woke up last night at about 1am and I heard strange noises...
As I came out of my slumber, I realized it was Steve talking to someone.
At first I thought he was sleep walking/talking.
As I started to become more awake sitting up in bed in the dark,
I realized he was talking to Thadeus!

It seems that Thadeus had pulled one of his Thursday night walkathons
over our bedroom and Steve's sleep was disturbed for about an hour.
I had slept through it this time, but Steve, he had had it about up to his eyeballs.

Many times we've laid in bed staring up at the ceiling wondering what on earth he could be doing at 1am in the morning walking back and forth opening drawers and just basically walking around and around a 10'x11' room.

Well, last night we got an answer, but we don't believe it. See what you think.

Thadeus: Hello?
Steve: (read extreme accusatory tone here) What are YOU DOING???
Thadeus: Steve, I don't think that's an appropriate question.
Steve: It's 1:00 in the morning. What could you possibly be doing?
Thadeus: I'm studying.
Steve: Well, what do you have a book in your hand and walk around? I thought people sat in a desk to study.
Thadeus: Well, do you want me to walk on air?
Steve: Can't you at least take your shoes off?
Thadeus: I don't have any shoes on. You want to come up and see for yourself?
Steve: No. The point is that from 10pm until 7am there shall be no noise in the building that disturbs any other tenants as outlined by the Chicago Multi-unit Noise Ordinance and that is to benefit both of us. And that is in your lease- read your lease.
Thadeus: blah blah I work nights blah blah Eugene leaves for work at 3am blah blah. I don't complain that the garage door is frozen shut.
Steve: Well, when you have freezing rain, which happens occasionally, sometimes locks are frozen. We can't control the weather. You should tell us when the lock is frozen and we'll de-ice it.
(My feeling is that if it were me renting the garage, I'd keep some de-icer on hand but then I'm a DIYer)
Thadeus: I don't complain when your dogs are barking.
Steve: Well out dogs don't bark after 10pm at night. And we're working on training them.
Thadeus: Well I guess it's probably not appropriate that my Mother and her 3 young adopted children who are moving to the US should move in upstairs?
(Steve is thinking in the back of his mind they have no legal right to move in)
Steve: You're absolutely right Thadeus. The building cannot support that level of usage.
(If you recall, when they had 6 people over there during the holidays, the toilet backed up several times and the plumber was out twice)
Thadeus: I guess I will have to move out early because they are coming here.
Steve: Well we have a rider in your lease and we can discuss a specific time later.

We just flat out don't believe he was "studying". You sit still when you're studying. The problem here is that we and they are on completely different schedules. Not to mention, I don't know when this guy ever sleeps. I think he's sleep deprived. He gets in all these car accidents, which to me indicates sleep deprivation.

This is great news though IF THEY ALL LEAVE. We have to see about getting them ALL out.
If not, we'll have to serve 30 day notices to the other occupants who are not on the lease and maybe even evict them. But we have both decided that if Thadeus leaves- they are all out no matter if we have to evict them or not. The other 2 living up there are less considerate than Thadeus in general and less responsible. Oh what fun.
Posted by Jocelyn at 4:15 PM 8 comments: 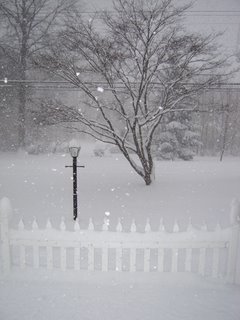 I made my trip to see my new nephew Ciaran (pronounced "Keer-ran") this past weekend. I got trapped in CT due to the storm. It sure was pretty though.

Ciaran is a gailic name in case anyone's interested. It means "little champion". Can you tell my sister and her husband are both Irish and competitive cyclists and one a former rower at that.

No surprise we watched the Olympics all weekend. Gosh those athletes are all so good looking in an all-American-type way- it's really kind of an oddity. 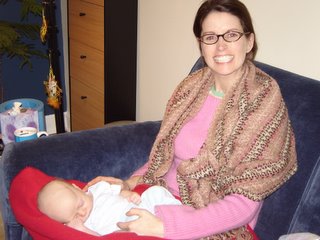 Here's the proud auntie with the little cutie pie.

I know I shouldn't put political commentary on this blog (I try to avoid that since we have such a harmonious scene here) but I can't resist saying that although I'm sorry the man was shot, I am really enjoying all the Cheney jokes and the fact that the man might actually be forced to explain something to the public and the press. It just kills me because it really seems like the last thing he would ever want to do.

More on the house later!
Posted by Jocelyn at 5:38 AM 1 comment: 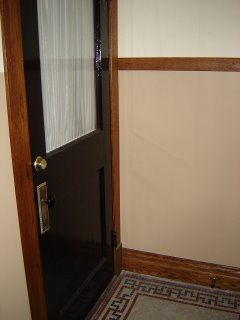 Yesterday Steve and I worked on installing trim in the entry. We are probably about 2/3 of the way done. We were lucky because most everything went up nicely.

As I've said before this room is pretty small, so it's hard to get really good photos. We are planning to add 2 vertical pieces of oak on that wall, which will match the opposite wall.
The past few weekends Steve had rebuilt the framing around the side windows because it was not built properly in the first place. The thickness wasn't level with the outside wall and it didn't look seamless. A minor detail, but these are the details homeowners tend to be willing to address as opposed to when this building was entirely a rental.

Since he finished that we were able to install the trim. 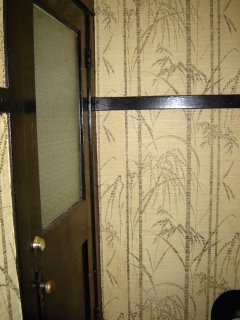 Here's the same side of the room before demolition. What we have left to do are some of the horizontal pieces of trim that frame the room and the vertical decorative design and a few pieces of baseboard and one piece around the front door.

I felt SO HAPPY to get the room to this point. It takes a while, but it practically brings a tear to my eye to see things come to fruition.

I demoed the room around mid-June. And progress slowed to a halt over the holidays. My motto is it may take a while, but it's not a race and what matters is that you make it to the finish line with panache. That has to be my motto because these projects take us a while and we learn as we go.

Here's a couple more shots of the room when I first took the wallpaper off and now. 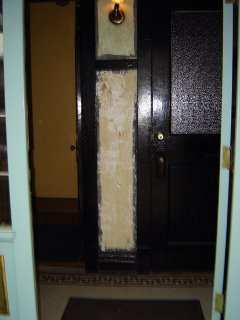 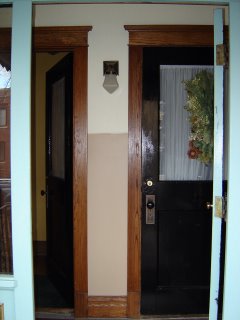 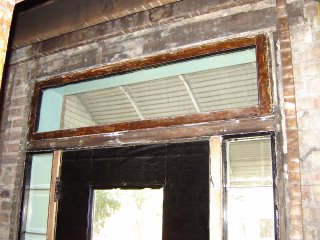 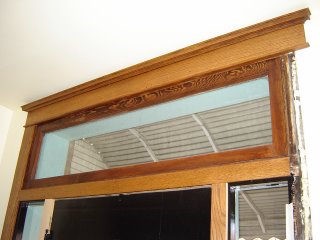