Ludington architecture was not so very spectacular. There were some nice Victorian homes on the main road to downtown, but we didn't feel compelled to take photos. I did capture one craftman influenced home that we admired. Not totally done in period, but a nice structure. 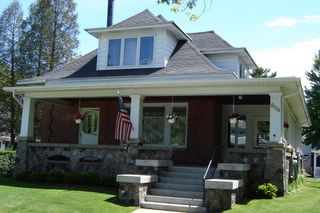 I like the columns, front porch, and stone base. 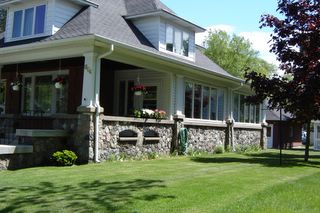 As I reported, we got the car back with no damage. It was parked about 6 blocks away. The city found the address the next day. We were relieved and we had a great time in Ludington.
But you won't believe this next part. Life is just too ironic sometimes- it's unreal. I refuse however, yes REFUSE to believe we are cursed with vacations.

As we were leaving today, we were getting the car packed up and our 2 dogs in. In the confusion, dogs in and out etc... we both forgot to close the back passenger door- the one behind the driver's door.

Before you dog owners get worried, we didn't run over a dog or anything. But what did happen is when Steve backed up the car, the door scraped across his parents brand new Ford Taurus and scraped it up as well as damaging the door on our car- or should I say MY MOM's car.

His parents sounded their horn before we realized what was happening and by then it was too late. Can you even believe this? I can't. So now we have to deal with getting the cars repaired and telling my Mom tomorrow when we pick her up at the airport. I just can't be upset about it-maybe I'm in denial- but I refuse to have this ruin our lovely weekend.

Needless to say, Steve is quite drained (and pissed off) after the whole thing and I don't know if the brackets will be addressed tomorrow. And I am smart enough to know that now isn't the time to ask.

This whole thing reminds me of the time a year and a half ago when we were crossing the street near our house and a car came out of nowhere and ran over my foot. Oh, and that was on my birthday too. But that's another story...

When bad things happen to you, whenever possible, just laugh. Hope everyone has a good holiday weekend!
Posted by Jocelyn at 5:25 PM

Boy howdy, you guys really don't need to own a car. Rent next time and get the most insurance they offer. I'm glad you made it back in one piece.

Poor dears. Vacations are always like that for us, too. I think the real benefit of a vacation is that it makes you appreciate being home! :)

Hey Jocelyn...thanks for the comment. And you're absolutely right...it's a GIANT process. Glad to see there's somebody else out there willing to take a few baby steps along the way! Can't wait to see the progress on your entryway. Have a great one!!
Maria

Lakewood-
I like the "muddler" section on your blog. I always wondered what the technical term was for houses that have many generations of remodeling visible. Nothing's worse than an old house that someone tried to modernize back in the 60's, or 70's.
Building codes should have forbidden formica, cheesy wood paneling, orange shag carpeting and toothpaste green paint :)