After my recent posts on "The Ugly" and "The Pigeon House" I was starting to feel like this mean person who picks on other people's homes.

I felt better this morning when I realized it was time again to flyer the surrounding area for the next CAPs meeting. For those of you who don't know, CAPs stands for Chicago Area Policing.

We have CAPs meetings in our beat every month and although I only attend about 3-4 times a year (usually because they are on Monday nights and that is a recuperating evening for me after a working weekend), I volunteered last summer (when I was unemployed) to handle flyering for my area and I have just kept it up.

The flyers are a good way to promote people getting involved. So this morning, I grabbed my trusty roll of tape and flyers and headed out. 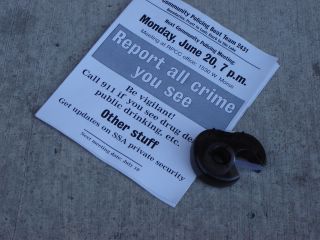 To me it's important to ge involved in some way with my community. Even though Chicago is a big city, I have always known my neighbors and have been open to talking with different kinds of people. To me that makes a house and the community more than just a residence, but a home.

The neighborhood I live in has a pretty colorful history. Back before the riots in the 1960's this was a nice middle class Jewish neighborhood. In the 60's and after the urban flight to the burbs, there were alot of so-called hippies here and many have stayed. We still have a very liberal base here.

One kind of neighborhood beacon is the Heartland Cafe. It's been around since the 60's and it's a neighborhood oasis. It's owners were and still are politically active and very active in community politics. The perfect place to say, watch election returns or meet Barack Obama at a fundraiser, or chill out after working on your house all day Saturday.

Can you tell I love my neighborhood?
Posted by Jocelyn at 6:52 PM

Have you heard Barack Obama speak in person before? That guy has the gift. And what a story – the American Dream. With his skills, he reminds me of a Texas Congress Woman back in the 70s. I can't remember her name now. A black woman, kind of heavy set, and an orator who was mesmerizing. I heard her speak as a young'n and it changed me. No kidding.

I wouldn't worry too much about your Good, Bad & Ugly posts. Most, I think, agree with you, and hey, if you can't be open and honest on your blog then where can you be?

Well, I missed him when he was at Heartland. I have heard him on a few conference calls when I was at fundraisers at people's homes (my Mom's included). I can tell just by talking to people who have spoken with him in person that he moves people alot.

He represents alot of good things to me: idealism, integrity, hope in the unseen, and more.

I won't politicize too much but I think we have the best Senators here in IL. :)