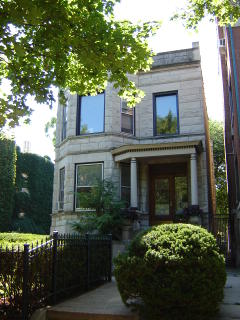 I found out on Saturday that the pictured building has been sold to a developer who plans to tear it down and put up 6 condos. I literally felt sick to my stomach.

Steve knows the guy who owns the building. He's a former Loyola University professor and has lived there for over 30 years. His wife is getting arthritis and the stairs are getting to her etc... They are moving to a high-rise in nearby Evanston and I think they plan to travel alot.

This property is on a double lot, which is why the developers want it. They can build their million-dollar-making 6 condos on the land.

As soon as Steve told me, I stopped working (I was staining trim) and walked the block to their house with my camera.
The woman (I don't know her) opened the window as I was taking these photos and asked me what I was doing etc...

A conversation ensued about how I was really upset that this perfectly maintained building was going to be torn down. I won't go into all the details, but from what she said to me, she sounded like she'd been brainwashed by developers. She said things like this:

"No one would want to pay the money to do the work on this place in this neighborhood."

Now, I know you guys will all agree with me on this, that this simply is not true.

Frankly, I think this is an outright lie. I never saw listing signs on the building and believe some developer told her that or maybe a mortgage broker who is in tight with the developers.

"Do you have someone who can buy it?"

I will do what I can on this one. Call the Alderman, rally the troops, but it may just be too late. But you bet I am going to show up at the perfunctory Meeting the Alderman has regarding this property and give them a jar full of vinegar! I'll let you guys know how it goes.

I'll post on the work done this weekend during the week. Despite this, it was a productive weekend at our house.

That is sad that they didn't even try or do a public offering of the site. The more time I spend out of my life working on my old house (time well spent) the more I look forward to passing it on to a like minded soul.

Very frustrating. Those type of situations always seem ludicrous, but I guess it boils down to money. Probably the same type of people that don't understand why one would spend so much time and money to restore an old home versus tearing down and building new. I am not convinced that new construction is as well done as it used to be either.

There's been a lot of that here too. Beautiful old Victorian homes are getting knocked down and replaced with generic boring zero-lot-line row houses. There has been several arson incidents at these sites while the new condos are being built... not to advocate. :-)

There ought to be laws preserving these great old houses. Especially since the current economics are doing exactly the opposite.

Instead of tearing it down, why wouldn't they move it? They can move just about anything these days. I know in Ann Arbor they moved some gigantic victorians to save them from ruin when they decided to build a new office for Detroit Edison. Also, there was a huge six apartment brownstone that was built with huge stone blocks and they picked it up and moved it to a new locale.

Aren't you in a landmarked district? Maybe you can get the Alderman's office to get landmark status- that would at least make the Alderman's office more powerful regarding building. Knowing Chicago just by my long walks around Lincoln Park, the houses they usually tear down are anything with wood siding. I am surprised they are wrecking something built with stone rather than trying to work with it. It amazes me how much money is sloshing around Chicago.

I'd suggest talking to neighors too, if you have any neighborhood groups try enlisting them in the campaign. A good deal of publicity may be able to sway developers from knocking down the structure.

What a huge loss that will be, and what a huge waste. That house could last forever. It really leaves a sick feeling in my stomach. We are such a wasteful society. Isn’t there a Historical Society that you can work with? Will the new builders need some kind of variance to build a larger structure? Maybe working with Aldermen, historical society, and immediate neighbors of the property you can stop this travesty. I recall when I first started reading your blog they were tearing down a very nice house next door (or was it across the street) to build the condos. What a waste.

I agree with Greg - what a waste.