Ever since we had the post replacement last May, things have been pretty much in disarray in the basement. Believe it or not, Steve used to have his office down there. Happily, he now has moved up the world and his office is on the 1st floor den.

What you see here is where his office was. We had rugs down and less junk, but it was pretty dismal. Especially because there was no natural light. So this summer, when we were adding windows, I insisted that we put a new window into this room. 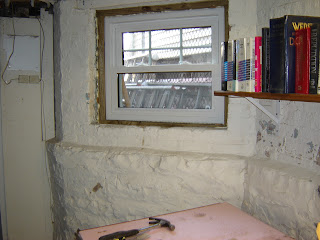 Before, this window was boarded up and Steve had a huge cork board over it. It is amazing how much nicer a space is with some natural light.

As you can see in this photo, our foundation is stone with brick above it. When we finish the basement, we have the choice of covering the stone and brick with drywall or we could sandblast all of it and leave some of it exposed.

We know someone who did this and it looks nice. Of course, you'd lose insulation, but we were thinking of putting in radiant flooring and that would certainly help with warmth. 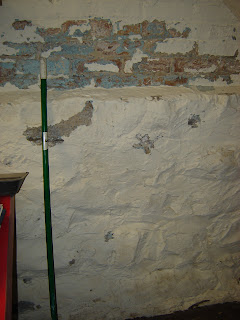 Here you see why brick should not ever be painted- a little thing called efflorescence.


Today, we swept and used our new shop vac to clean up as well as threw out as much we possibly could. We are trying to get rid of anything we don't need. 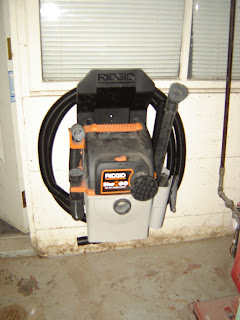 We also installed the shop vac finally. We selected the StorNGo by Ridgid because it doesn't take up alot of space and has 5 horsepower.

I was also on a mission to remove dead wiring and random nails and screws that have no use anymore. Getting rid of all the remnants left from all the hack jobs done in the past makes me feel better.

I'm really not sure how we are going to approach the basement renovation. I have some ideas for cleaning up certain areas that would just be temporary. No basement dig out is imminent as I've said before. 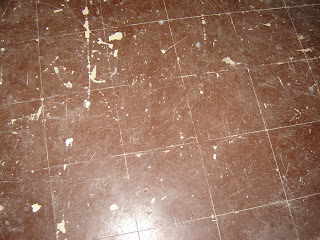 Currently we have some kind of tile on the floor that's been painted over. Underneath that is poured concrete. Of course, it's not unlikely this tile contains asbestos too.

I wouldn't want to scrape the tiles up myself until I have them tested and see what I'm dealing with. It would probably take me a long time and that's the kind of job you want over quickly. 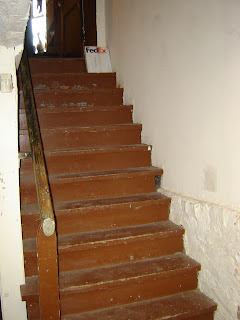 The basement stairs have one coat of brown paint on them. Underneath this is solid oak. I have had the notion to strip them sometime when I'm in the stripping mood- probably not till we can have the windows open again though. 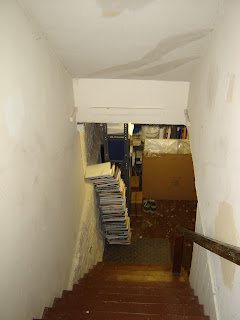 This is the view from our den to the basement. All this is original plaster and it's in decent shape.

I have also had the notion to repair the plaster where it needs it and paint the walls here. I mean why not? It would look cleaner and freshen it up.

Although I've thought of replacing the staircase with a spiral one that saves space, part of me likes keeping the original stuff. Especially when it's solid oak and in very good shape.

Oh, by the way, in this photo you can see who the real pack rat is around here. That stack you see are annual reports that are just a portion of what Steve has for reference for his work!

Anyway, this is just one side of the basement. The other side has the boiler, water heater, laundry room and lots more storage space. Alot of space to be claimed, which is why it is so tempting.

p.s. Greg, we didn't buy a Silent Paint Remover. I was planning to rent one from the hardware store this weekend, but when I went there, all of them were broken (phone first!). They told me that the switches were broken and that the company that makes the switches went out of business. That doesn't sound good and I may have to just use my heat gun now. I prefer to use the heat gun with outside ventilation and it is way too cold for that now, so this will have to wait.

i have a hard time not being jealous of all that basement space. And it's not just any basement, but one with cool details like the stone foundation and oak staircase. It makes me happy that folks like y'all have such a place. I hate to think what could become of it otherwise.

Unless the floor tile are friable asbestos is harmless in tiles. More concern are old theatre curtains, but tiles flor nothing to it. Great site, glad i found this blog.

It is nice to have a basement, but remember the more storage space one has, the more you can store ;oP

Kind of a pitfall. That's why I'm trying to streamline so we can actually use it as living space too.

All broken! Ouch! It makes me wonder if a lot of people out there now have $400 door stops with a broken switch?

And yes, I too am very jealous of the basement. After spending more than a week in the crawl space of my house plumbing and wiring the new bathroom I want a basement even more.

And as for the asbestos thing, I agree, if there is asbestos in the tiles it is non-friable and of little danger to you. Just don't use any mechanical tools on it. Don't drill or grind it and you'll be fine.

You spoke a week or so ago about the pipe insulation. That is friable asbestos and this is where the hazard lies. Even so, encapsulation is almost always preferable to removal, and it costs a lot, lot less. There is a lot of hyperbole surrounding asbestos. Don’t just assume you need an army of professionals in bunny suits to deal with it.

Your basement is awesome! I haven't gone in ours since we first bought the house, at which time I saw two HUGE house centipedes wrestling each other, caught in a big gross spider web. That was enough to send me running and I haven't been back since :) Rob uses it frequently though, when he has to cut lumber [he's the brave one].

A white wall is always so tempting! I say paint away! :)