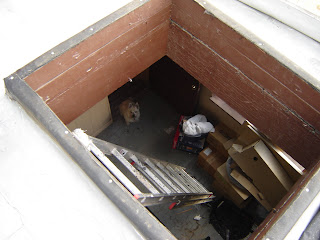 This post is a perfect example of how projects can drag on for years, and yes I do mean years!

We had our flat roof torn off the summer of 2006 and some faithful readers may recall that at that time we discovered that our parapet wall was very deteriorated. We had to determine how to address that issue. Back story here.

We planned to undertake the chimney project ourselves to save money, but ultimately, we ran out of time and we ended up paying our contractor to rebuild the chimneys before winter. The project was not completed though because we still needed chimney crowns and caps. Due to other projects, this didn't happen until 2 years later..just this fall.

Although my blog posts have been sparse lately, we have actually been still working. Steve completed the cast-in-place chimney crown and installed the chimney caps last weekend just before winter's arrival. Hooray! 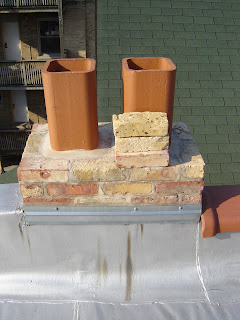 The first photo illustrates the starting point this fall- one of the two double flue chimneys exposed to the Chicago elements.

Before undertaking this project, Steve did internet research. He found various plans for pouring cast-in-place chimney crowns made of concrete. He called up the Masonry Advisory Council and the Portland Cement Association. Below is what he learned.

The chimney crown must be made of concrete and not mason mix because concrete is used for foundations etc... while mason mix is suitable for laying brick.

Secondly, the crown should be at least 3" thick and it needs to overhang the chimney by a few inches with a drip edge to prevent rainwater from traveling down the chimney causing rapid deterioration. He also found out that the concrete crown must have a bond break from the chimney, that is there needs to be a separation between the chimney(made of brick) and the crown (made of concrete)because both materials expand and contract at different rates and would compromise the chimney with the different movements during freezing, thawing etc...

The concrete crown must to be sloped so that water will drain off of it. The recommendation was that there should be a 2" slope to shed rainwater. Rebar was suggested to reinforce the crown also. 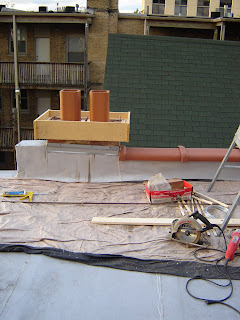 Steve built wooden forms for both chimneys. The concrete would then be poured into them. The form was screwed into the mortar of the chimney using masonry screws. And alternative method would be to use shims underneath the bottom of the frame, which would hold the form in place. With this approach, there is no masonry repairs to do from the screw holes afterwards. 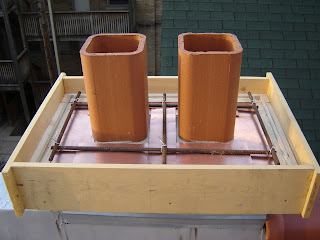 In these photos you can see the completed form ready for pouring the concrete. Here are the steps he took to create this form:


First, he bolted 2x4s around the perimeter of the chimney flush with the top course of bricks.

Then, he took 1x8 lumber and attached it around the 2x4s, which created the box you see here. The 1x8s were also flush with the bottom of the 2x4s. This "box" would contain the poured concrete, which would then become the cast-in-place chimney crown. 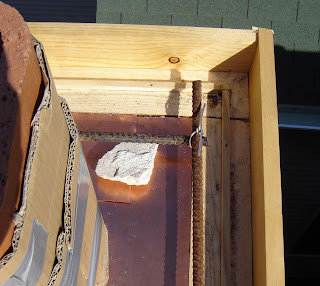 This close up photo shows more detail on the form he built. Steve nailed in place about 1"from the form edge 1/4" strips of wood. This creates the drip edge (indentation in the concrete). It was removed with a screw driver after the concrete was dry leaving a channel. This drip edge  channel prevents water from running down the side of the chimney bricks.

To create the "bond break" between the chimney and the concrete crown, Steve covered the entire chimney top with 10 ounce sheets of copper, which extended beyond the chimney base by 1/2". He used 10 ounce copper because that is what was available, but 7 or 8 ounce would be fine.

He tightly wrapped the flues in 2 sheets of corrugated cardboard. (Cardboard was removed after concrete dried and gap was then caulked.

Rebar was put along the length and width and between the two flues and was tied together with wire and then raised up to the mid-point of the crown using rocks.

Steve wasn't sure if the weight of the concrete might cause the form to blow out and break apart, so he took some wire and wrapped the box to be safe. Since the form was screwed together 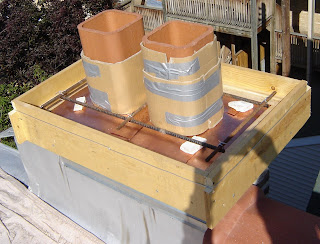 (for strength and easy disassembly), Steve thinks this reinforcement is not needed.

In this photo, he was ready to pour the concrete.

He mixed up the concrete, poured it and created the recommended slope. He took a hammer and pounded all sides of the form to eliminate air bubbles. According to Steve, it was about 75 blows. He is nothing if not detailed and is helping me write this if you can't tell!

He then tarped the form with plastic sheeting to slow the drying process, which makes for stronger concrete. He kept it tarped for a week.

**It's important not to tarp the flues for safety reasons. Chimneys need to operate at all times...CO2 etc...! We do not have fireplaces, but our boiler and water heaters are connected to the chimneys and need to be vented outside for safety. 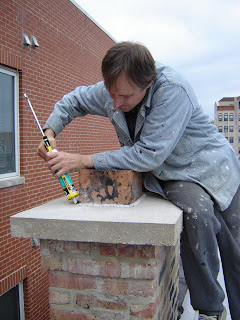 After the concrete cured for a week, Steve unscrewed the form, removed the drip edge strip of wood underneath, removed the cardboard and installed foam backer rod into the cavity and then applied a generous amount of caulking around the flue. 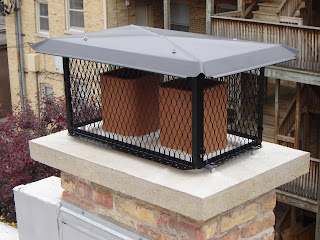 Of course, there are chimney crowns made of aluminum or copper, which will last forever but are much more costly. We opted to be budget conscious and these should last 10 years. Assembly is very easy. They get mounted to the cap as seen. 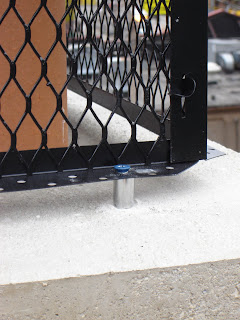 One thing Steve did to extend the life of the structure was to raise the cap using 1" chrome spacers, which will hopefully prevent moisture from corroding the bottom of the frame.

So, we have now stopped the rapid deterioration of our chimneys and hopefully we will be solid for some time to come.

Many people never go up on their roof until there is a problem. It's very important to inspect your roof once a year. We usually do this in the fall.

Steve is really becoming quite the amateur mason around here. I think I'll keep him for a while longer. :o)

Hi Jocelyn -- I love when you update these days! I just read your parapet wall backstory and I'd like to ask to be put in touch with your 2 Bulgarians ;) We have similar work to be done on a '20s era condominium in Hyde Park and are looking for exactly that kind of contractor (not masons, etc.). Our regular "guy" can't get any helpers together and is busy with other stuff. I'm not sure you're comfortable sharing that here but maybe we can email. I'm logged in but I'm not sure you can see my address. If so, would you mind sending me a message? I couldn't find a link for a direct email on your site. Anyway, thanks in advance and keep up the great work!

Hi Al, You can email me at jmm922@yahoo.com and I will email you their contact info!

I have not posted before, but have been enjoying watching your progress on your beautiful home. However, I was wondering if leaving the 1-inch gap at the bottom of the chimney cap would allow rodents like chipmunks and squirrels to enter the chimney? I think I'd rather deal with a little rust than a dead rodent in my chimney!

Hi Corrina and thanks for the comment!
Actually, we don't have chipmunks in our area and the squirrels are pretty big. It's very unlikely they would get in there unless they chewed thru metal. Knock on wood, even before the cap was on, we never had any animals in there and I hope it stays that way!

You remind me of last fall though when something was stuck in our gutter scratching and scratching- eventually it stopped. I almost wanted to open up the gutter because it seemed so awful for an animal to die trapped like that, but we didn't. It was outside, so I never noticed a smell. Hopefully it escaped!

Steve did an awesome job!

Wow- he did a great job! Sometimes inr eovating these old things, there are just things we can not do ourselves- but KUDOS to Steve for all the research and great work. It looks very professional.

I may have a similar project in my future as well, actually, im certain of it. Very impressed with Steve's attention to detail and getting things done right.

I want to thank you for this valuable information! I'm off to start my own crown rebuild project.

I have been searching for this exact project for 3 hours. This is the best detailed and correct info that I have found. Thank you.

Bruce, thank you. Steve said to make sure and have the flashing (copper or other) overhang the crown by abour 3/4" past the chimney brick. This will allow water to pool off and drain away from the bricks. He cut ours flush and realized that after.

Wow, I have been searching the web for hours trying to find out how to build a chimney crown form. This is just what I needed. Thank you for sharing the pictures and descriptions!

Hi Rob, It always brings a smile when someone finds the chimney post and finds it useful. If you have any questions, feel free to email Steve at jmm922@yahoo.com.

His work has held up well. We had a professional mason on the roof for something else and he complimented the quality of work. Steve didn't have the heart to tell him that he (an amateur homeowner) was responsible for the work.