I've hesitated posting about this because it doesn't fit my image of us. We are seasoned DIYers after all, we know what we are doing and we are perfectionists (at least Steve is, it only takes one anyway). I've singlehandedly refinished over 1000 feet of oak and a dozen doors after all. Steve builds furniture by hand (the hard way/the craftsman way). We don't make mistakes. (cough cough)

But then I thought to myself, "Self, you haven't got that much going on with the house that you can post on the blog to be so choosey" and "Self, aren't you supposed to be all about keeping it real?? This isn't some HGTV show after all. I mean, really."

So I decided to share our recent disappointment with one of our previous projects. The thing with DIY is you don't want the work just to look good when you finish it, you want it to last a really really long time so you don't have to do it again for God's sake.

Sometimes, it doesn't work out that way. And yes, this even happens to people like me Steve who do their homework and have been doing DIY for almost a decade. It happens because....(hear this all ye disgruntled contractors!!)--we are not professionals. And actually, now that I think about it- things can go wrong for professionals too. So there.

So now you want the dirt right? Everyone always does.
It was late in the season, November 2007 to be exact and we were worried our dilapidated garage door would not make it another winter and would splinter and crack into pieces leaving a garage without a door, which would be certain disaster (relatively speaking of course).

We would have started sooner, but we got behind and didn't find a a replacement door  until mid-October... 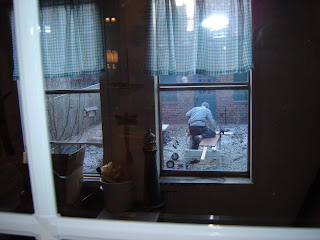 From that point, it was a race to finish the door before it got too cold. The door was painted and needed to be stripped. That was my job.

I did my usual heat gun and strypeeze combo outside in the backyard and all seemed well until I put the first coat of primer and some red dye seemed to be bleeding through. Uh oh.

As it was now November and getting colder fast, we perservered and continued painting. Steve replaced the glass panes, fabricated muntins for the missing pieces, and concentrated on framing the door.

It was one of those times I felt bad for Steve because he was working outside in not very nice weather (see photo) and there was no turning back. Kind of like when you go on a hike and the weather turns bad, really bad. You have to hike back, no option. That's the kind of project replacing an outside door is. You can't just leave it till next year when the weather is better etc... From this and other such experiences, I don't recommend starting a project like this so late in the season. Live and learn.

Anyway, Steve managed to get the new framing and trim in though I recall some choice words uttered and real frustration with the fit. He wasn't 100% happy with the finish carpentry.

I remember he said (almost as a warning to the errant trim), "I'll be redoing this in the Spring!" And I was like, "Oh, great. Can't wait." I didn't say that out loud mind you, just thought to myself. I'm not that dumb. Rather, I behaved more along the lines of, "I'll make dinner tonght okay?" and "I'll do the grocery shopping and bake some cookies for you okay, honey?" And Steve said in reply, "grrrr. okay."

Painfully, he managed to get the door finished before Christmas. And after that punishing end to the season, we took a much deserved break.

Happy ending right? Not exactly. This is a good project gone bad so it doesn't have a happy ending.

Remember that red stain bleeding through the white primer? Well that seemed to effect the bonding of the paint to the wood. It was either that or the cold temperatures that caused the paint to fail in several places.
So, for the past two years, I have scraped, caulked and painted that door . Steve hasn't redone the trim yet either. We've had other fish to fry and there's still some healing to do before we revisit this project.

I never posted about this because it was so annoying and I couldn't stand to write about it, but now after a few years have gone by, I have enough detatchment it's okay now. These things happen when you are a DIYer and in life. Things don't always go as planned. It's another important lesson and another life lesson that we have fully actualized through our DIY activities. Life as a house. It really fits sometimes.
Posted by Jocelyn at 5:57 PM

So on a scale of 1 to 10, how would you best describe you love/hate relationship with this door?? :)

Anyone that says they haven't had a problem with one of their DIY projects lies! I'm had plenty of problems and I work for a construction company. Nothing to be ashamed of and it's certainly something that many folks face.

Keep up the good work!

I am finally catching up on blogs after a busy year! If you want to stop the bleeding through there is a simple solution ...... wait for it ..... shellac it! But you knew that .....